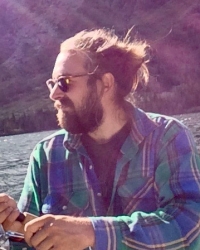 My research is focused on the gas that surrounds galaxies, the so-called circumgalactic medium (CGM). The CGM is responsible for fueling star formation and thus galaxy evolution over cosmic time, but its physics are dominated by the complex interplay of gas accreting onto the galaxy balanced by feedback from exploding stars in the galaxy. I am constructing a large spectroscopic database that will require the use of statistical and machine learning methods to tease out the complex gas physics taking place in the CGM.

I am also an IGERT fellow at UW working with the eScience Institute.

After graduating from UT, I moved to New York City to work in the Department of Astrophysics at the American Museum of Natural History. My research there with Sebastien Lépine (now at Georgia State University) and Michael Shara included low mass stars as candidates for future exoplanet surveys, Wolf-Rayet stars as candidates for SNe Ibc, as well as searching for cataclysmic variables in globular clusters.

Although I moved around the boroughs of NYC frequently dodging new condos, Brooklyn is where I called home. After five wonderful years it was time to go back to school, bringing me to Seattle.