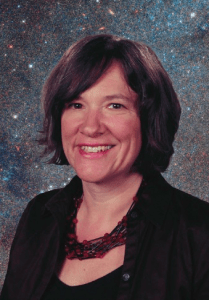 As I prepared to write this fall newsletter, I imagined discussing my continuing joy at the return of the school year, the many exciting successes of our students and staff, and the projects we have coming up this year. Instead, my plans took a sad turn, at hearing of the loss of one of the founding members of our department, Prof. Paul Hodge.

The UW Department of Astronomy was officially established in 1965 (although the history of Astronomy at UW goes back to the 1890’s), when Paul Hodge and George Wallerstein joined long-term UW faculty member Theodor Jacobsen to create an independent department with its own Ph.D. degree.

Culture comes from people, and when you found a department with people who combine brilliance with decency, you establish a culture that reflects those traits. Throughout his career, Paul embodied values I treasure about UW Astronomy, in large part because he imprinted those values himself. He was a broad thinker, with interests that spanned from the geology of impact craters on Earth to the formation of galaxies. He was a deeply committed mentor of students, known for his patience and guidance when students struggled, and his sincere pleasure when they succeeded. Paul was also someone who shared his deep knowledge generously and widely. Although he was not a “showy” personality, he wrote prolifically throughout his life, covering such diverse topics as undergraduate textbooks, hiking guides, galaxy atlases, and popular science books. He also devoted 20 years to stewardship of the Astronomical Journal. As editor, he read every single paper that passed through the journal, often offering thoughtful critiques and commentary on top of the standard referee’s report.

But more than his accomplishments — as measured by his many papers, books, and dozens of Ph.D. students and his role in founding a top-ranked astronomy department — Paul was known for being deeply, deeply kind. In the two decades I worked with Paul, I do not recall him ever saying a single word against another. He was a gentle man who always had time for other people. His face would light up when colleagues or students dropped by, delighted to hear their news, whether it was about a recent excursion to the mountains or a new scientific result. I, and all who have had the pleasure to know him, feel Paul’s loss keenly.

P.S. If you have a connection to Paul and wish to honor his memory, you may want to consider making a donation to the fund that Paul established to support graduate students in his department. Click here to donate.

Debby Tran is a second year graduate student in the UW Astronomy Department working with Professor Sarah Tuttle. Debby’s research interests are in astrophysical instrumentation and massive star formation. Specifically, she has been working on the retrofit of KOSMOS, the Kitt Peak National Observatory Ohio State Multi-Object Spectrograph, for its move to the Apache Point Observatory. This upgrade consists of adding internal calibration lamps and a slitviewer to KOSMOS. The addition of a slitviewer calls for reflective slits, which Debby fabricates at the Washington Nanofabrication Facility using photolithography, chemical and plasma etching, and plasma-enhanced chemical vapor deposition. She is also finishing up her undergraduate research in doing Bayesian analysis of orbital parameters for a small-N system in the Orion Nebula Cluster. Currently, she is also a Graduate Staff Assistant for the McNair/EIP Program at UW.

“I have been delighted to have Debby join my group. Her intellectual curiosity, hard work, and enthusiasm are evident throughout her work. She has masterfully moved forward work developing & manufacturing the KOSMOS spectrograph nanofabricated slits which we are excited to test and install this winter at the Apache Point Observatory 3.5m telescope.” –Prof Sarah Tuttle

In addition to playing with electricity, lasers, chemicals, and plasma, Debby has perhaps too many interests. She is interested in using data science to advance social justice. Specifically, Debby is currently using Terry Stops data to inform police contract renewals in Seattle to prevent police brutality.  As a lover of budgeting and finance management, Debby has taken charge of funding for the Graduates of Color in Astronomy and Physics and seeks to use this to make a space for the graduate students of color in both Astronomy and Physics Departments at UW. Debby is also interested in building and maintaining trails through the Washington Trails Association, enjoying the Pacific Northwest through hiking, backpacking, and landscape and astrophotography. Debby is getting back into playing guitar again with the help of Night Lunch, Seattle’s premier only-Astronomer band. As the cold season approaches, Debby copes by baking abundant amounts of cookies and various other baked goods. As a queer woman of color, Debby’s ultimate goal is to make structural change in astronomy, STEM, and academia.

The Apache Point Observatory (APO) is located in the heart of Lincoln National Forest near 10,000 feet of elevation. The Astronomy Department at UW is one of several institutions that collaborate on the design and construction of the 3.5m and 2.5m telescopes. It is the centerpiece of our ground-based “toolkit” for research, and is used by faculty, graduate students, and postdocs about 100 nights per year. The telescope is normally used from the UW campus over the internet.

“It’s not unusual to see deer, elk, or even bears if you take a walk out one of the many trails nearby.  There is a story on site from years ago in which a staff member left the door to the dorm kitchen open, and returned to find a bear helping itself to lunch.  As you descend towards the desert the foliage changes from pine trees, to juniper to cactus to sand.  The wildlife changes as well from bears to lizards and rattlesnakes along the descent.  During the summer months, the monsoon is a spectacular event of nightly lightning across the white sands basin. APO provides an amazing vantage.” – Conor Sayres

Conor Sayres is a research scientist, and a graduate student who has been with the department for over 9 years. He is responsible for operations software on the 3.5m and 2.5m telescopes at APO and the SDSS APOGEE South observing system at the du Pont telescope at Las Campanas Observatory in Chile. This includes the code behind things like slewing the telescope, acquiring images, and observing and status interfaces to the various telescopes and instruments on site.

“Although I generally support the telescopes remotely, I meet weekly with the infrastructure and operations teams for each of the telescopes I work with. When I travel to the site it’s usually for instrument commissioning (I’ll be traveling down to APO to commission the Kosmos spectrograph soon, for which I wrote the control software), in which we exercise the new equipment on sky, identify/fix bugs and generally ensure that an instrument is ready for prime time.  Beyond commissioning trips, I usually spend time on site each summer during ’summer shut down’, which is a long block of scheduled engineering in which we disassemble much of the telescope for routine maintenance and upgrades.” – Conor Sayres

José Sánchez-Gallego is a postdoctoral scholar who has been with the department for over 3 years. He also has a heavy hand in the work completed at APO and Las Campanas Observatory.

“While I’m responsible, along with Conor, of keeping the wheels turning at APO on all things software related, I’m also particularly involved with MaNGA (Mapping Nearby Galaxies at APO), one of the surveys in SDSS-IV. In MaNGA we are obtaining spatially resolved spectroscopy of 10,000 galaxies, which allows us to study how gas and stars move in the galaxy, and how stars are born and die. I play different roles in MaNGA, including making sure that the data obtained each night meets our quality requirements, and writing code to optimally schedule each night of observations. I’m also the SDSS-IV plate designer. In the SDSS telescope we use optical fibres that are plugged into large, flat pieces of aluminium. Each fibre is precisely placed so that when we point the telescope to a specific point on the sky the light of stars and galaxies reaches those fibres and is directed to a spectrograph. That means that each aluminium “plate” needs to be accurately designed and drilled (in the Physics UW workshop) and then sent to APO. The science teams send me their lists of targets they want to observe and I coordinate the process of making sure that plates are drilled to those specifications.” –José Sánchez-Gallego

Kudos of the Quarter: Luke Surber

This quarter we’d like to give kudos to one of our undergraduates Luke Surber. Luke’s most recent research explores the potential benefits of simultaneous observations of Solar System Objects (SSOs) by the LSST, and ESA’s space-borne observatory Euclid. Luke produced a database of all the optimal future observations that can be synchronized. Synchronous Euclid and LSST observations can take advantage of the parallax between the Earth and the Sun-Earth Lagrange point (L2) to derive an SSO’s position and distance instantly. This would see orbits of newly discovered SSOs substantially improved. In general, by utilizing the Python library astroquery, taking the database of paintings, and querying sky-bot, one could approximate all objects that will be detected in those intersecting fields. Luke’s python script ‘LEAF’ (LSST Euclid Asteroid Finder) produced a treasure trove of observable objects (gigabytes worth of .csv databases!) allowing for a statistical assessment of the scientific yields from coordinating the two telescopes in the future.

Luke describes himself as an avid outdoorsman: “I love camping in dense forests and hiking along streams”. Luke studies and practices Judo in addition to his beloved physics and astronomy. Besides the mathematical sciences he enjoys learning about history (all kinds), existentialism philosophy, and evolutionary psychology. He’s a padawan in the arts but is fascinated by most forms, in particular, prose poetry, glassblowing, and painting.

Since we like to brag about our students, here’s a description of Luke’s work from his mentor Dr. Siegfried Eggl: “Luke was awarded the LSST Corporation undergraduate research summer fellowship at UW. After crossing the Atlantic to study with researchers at the Observatoire de Cote d’Azure in Nice, France, Luke returned with valuable expertise on how to track down and characterize asteroids. By presenting the results of his research at the annual LSST project and community workshop in Tucson, Arizona to an international audience he was able to promote a closer collaboration between two multi-billion dollar projects.”

The League of Astronomers is a club at the University of Washington which seeks to connect undergraduates to the joy of astronomy. We are open to majors and non-majors alike–all are welcome. We started out Fall Quarter with RSO tabling in Red Square, where we got to chat with many new members of our campus community. Our first meetings have had a great turnout, with many new and returning members joining us for another year of astronomy activities!

During Dawg Daze 2019, our mobile planetarium took part in the HUB Crawl. This event reaches thousands of students with games, activities, and fun to kick off the school year. Our volunteers gave the UW students the experience of flying through space and learning about our cosmos. The mobile planetarium has reached over 200 elementary school students this quarter! So far we have visited Wheelock Library in Tacoma and Redmond Elementary School, and many new volunteers have joined us. 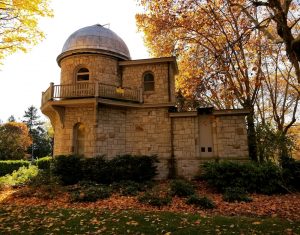 On October 18th, the LoA held our Haunted Observatory Halloween event at the Theodor Jacobsen Observatory. Having sold out and beyond on our tickets to the event, we feel it was incredibly successful. We had a wide range of attendees, including a supportive astronomy staff member, undergraduates from all across campus, and even members of our greater Seattle community! We hope to continue this event next year.

The LoA itself holds general meetings every Wednesday at 4:30pm PAB B360 (AKA the Astrolab), and our Tea Time Colloquia with Astronomy’s weekly speaker are Thursdays at 1:30pm also in PAB B360. You can keep up with our activities and meetings by checking out our Facebook page.