History of Astronomy at University of Washington

From the creation of the Astronomy Department in 1891 until 1965, there was only one professor of astronomy at a time at the University of Washington. Below are the major astronomy professors during this period.

This professor of mathematics created the astronomy department in 1891 and served as its sole professor. In order to learn more astronomy, Prof. Taylor studied as a special student at Lick Observatory, California, in 1890. When he returned from Lick, he created the astronomy department, and with $3000 allocated from the regents, purchased the new telescope and built the first observatory.

Professor Boothroyd joined the faculty in 1912. He introduced astrophysics into the course offerings, and worked in close contact with the astronomers of the Dominion Astrophysical Observatory in Victoria, BC, Canada. While at the UW, Prof. Boothroyd published papers on the spectra of binary stars. In 1920 he hosted the first astronomy conference at the UW, a meeting of the Astronomical Society of the Pacific attended by at least 20 astronomers. In 1921, Prof. Boothroyd moved to Cornell University, after which the number of astronomy courses at the UW declined. (Boothroyd later had a small observatory named for him at Cornell, the Hartung-Boothroyd Observatory.)

Professor Zanstra (1894-1972) was appointed to the faculty in 1926 as assistant professor to teach general astronomy. He had just earned his Ph.D. at Cal Tech, where he had written his famous paper, “An Application of the Quantum Theory to the Luminosity of Diffuse Nebulae.” This paper gave for the first time a quantitative treatment of the luminosity of gaseous nebulae and comets. For instance, his method, which is still taught today as the “Zanstra Method,” was applied to understand the luminosity, spectrum, and shape of the tail of Halley’s comet, which had visited in 1910. Zanstra’s pioneering work in astrophysics was, however, little appreciated in Seattle at the time, and this probably led to the brevity of his stay. After publishing a few papers at the UW, Zanstra took a position at the Imperial College of Science and Technology in London in 1928, and eventually settled at Amsterdam University in his native Holland. 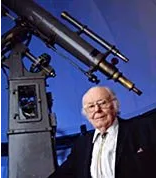 As a boy, Prof. Jacobsen emigrated to America from Denmark, studied chemistry, applied mathematics, and astronomy at Stanford University, and then obtained his Ph.D. in 1926 from the University of California Berkeley. He became a staff member at Lick Observatory, but due to a muscular strain incurred while moving the big telescope, he was unable to continue as an observer and thus sought a less physically strenuous position. In 1928 he was hired by the UW to replace the departing Prof. Zanstra and teach astronomy as well as courses in mathematics, such as trigonometry and theory of investments, and to open the observatory to the public one evening a week. Besides courses such as these, Jacobsen taught navigation and practical astronomy during World War II. The curriculum was slowly expanded with a number of intermediate astronomy courses (but never an astronomy major). He also hosted numerous conference at the UW during his 37 years as sole UW astronomy professor, including a small 1940 conference attended by Edwin Hubble.

Dr. Jacobsen’s research over the years focused on the spectra and motions of variable stars, especially of the Cepheid type. At the end of his career he delved into the history of early astronomy. This work finally appeared in 1999 as Planetary Systems from the Ancient Greeks to Kepler. Prof. Jacobsen passed away just after his 102nd birthday.

The University of Washington Department of Astronomy and Mathematics was established in 1891 by Prof. Joseph M. Taylor, head and sole member of the Mathematics Dept. and a former special student at Lick Observatory, California. At this point, the University was still housed completely in a single building located near the intersection of University Street and Fourth Avenue, the present-day location of the Olympic Hotel in downtown Seattle.

From the time of its opening in 1861 as a territorial university, course offerings in science were thin. The UW opened with 22-year-old Asa Shinn Mercer serving as president, professor, and janitor for $200 a year. For the next 32 yeasrs, the UW was more of a glorified high school than a university, graduating only 15 students from its college division.

When the University moved to its present campus in 1895, Dr. Taylor successfully advocated the construction of an observatory for the 6-inch telescope that had been purchased a few years earlier. At this time, he taught two astronomy courses: General Astronomy and Observational Astronomy. The Department continued to grow in its course offerings, eventually including astrophysics with the arrival of Samuel Boothroyd in 1912. In 1920, Boothroyd organized the first-ever astronomy conference at the UW, with 20 participants. When he departed for Cornell in 1921, activity in astronomy declined to a level of only two offered courses.

Herman Zanstra joined the UW faculty in 1926, coming from Cal Tech to teach General Astronomy, as well as astrophysics. Dr. Zanstra’s work concerned astronomical applications of the new quantum theory. In 1928 he left the UW to take a job in London. This was most likely due to the fact that his work could not be adequately appreciated in Seattle at the time, since only a few books in the physics library even mentioned quantum theory

In September, 1928, Theodor S. Jacobsen took over Zanstra’s 3 courses as well as 5 courses in engineering and mathematics. He would subsequently serve as the sole astronomy professor for the next 37 years. During this time, Jacobsen hosted multiple conferences of the Astronomical Society of the Pacific, taught astronomy and navigation courses, as well as a number of other courses in mathematics and even economics. In 1965, astronomy ceased to be a one-man department when the UW created the modern department with the introduction of a graduate program and the hiring of 2 new faculty members (both from Berkeley and both of whom retired only recently): George Wallerstein and Paul Hodge.

After 1965, the Department of Astronomy steadily grew. The next faculty members to arrive were Karl-Heinz Böhm (1967) and Erica Böhm-Vitense (1968), and now the Department has approximately 60 faculty, postdocs, staff, and graduate students. See the Department’s People page.

The Telescope and Observatories

In 1891 the Regents of the University appropriated $3000 to build an astronomical observatory. These funds had been allocated by the legislature when Washington became a state in 1889, and had to be spent quickly in order that they not revert to the State. So after such splurges as a grand piano, the Regents allocated money for an observatory. Professor Joseph Taylor taught astronomy at the time, and had just returned from a year at Lick Observatory. Compared to the instruments at Lick, $3000 was a small sum, but nevertheless sufficient for a good quality, instructional telescope. Dr. Taylor enthusiastically pursued the project, consulting with Prof. Schaeberle at Lick on the instruments to be purchased.

Given the small budget, Prof. Taylor settled on a 6-inch diameter objective lens made by John Brashear of Allegheny City, Pennsylvania, with the mechanical components of the telescope provided by the Warner and Swasey Co. of Cleveland, Ohio. Dr. Taylor designed an observatory building himself and employed two local carpenters to erect the frame and a mason to build the brick pier on which the telescope would be mounted. He then completed the building himself, working from sunrise to 8 am, then teaching classes all day, and resuming work on the observatory from 3 pm to sunset.

This first wooden-frame observatory lasted, however, only three years. When the University moved to its present campus in 1895, there were some building materials left over from the construction of Denny Hall (the first structure on the new campus). Taylor had these materials used to construct a new stone structure; this new observatory, which survives today, thus became the second building erected on the present campus. It is listed on the State Register of Historical Buildings. The dome and telescope were removed from the old observatory on the downtown campus, and moved by wagon to the new observatory near Denny Hall, where they remain today. A German transit telescope, bought in the early 20th century, was later added for instruction in precise measurements of star position and determination of longitude and latitude.