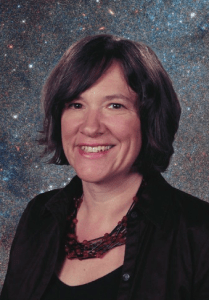 With the launch of this newsletter, we are hoping to welcome you as an on-going member of the UW Astronomy community. Since becoming Chair in Fall of 2016, I’ve been repeatedly struck by the importance of community to our department’s mission.  At the same time that we are exploring the vast, nearly empty reaches of space, our ability to connect with each other as scientists and educators is essential to creating knowledge and sharing it with the world.  Every time I see researchers discussing the latest results in the new space for our new Data Intensive Research in Astrophysics and Cosmology (DIRAC) center, or groups of undergrads collaborating in our recently remodeled Undergraduate Research Commons, or grad students hosting “Astronomy on Tap” events in local breweries, I see how it is the connections between us that often drive discovery.

The spirit of shared community at UW Astronomy — backed by a commitment to research excellence and strong support from our donors — is one of our Department’s most important draws. Currently, our graduate admissions committee is hard at work winnowing through over 350 applications for one of roughly 5 slots in next year’s entering class. Our program for undergraduates is steadily growing as well, with over 70 students currently declared as majors, both in our regular and our new “Astronomical Data Science” tracks. We also have been hosting a steady stream of exciting visitors, who are eager to exchange ideas about everything from asteroids to dark matter.

As we head into spring we hope that you will take part in one of our many department events such as: Open house Wednesday nights at the Jacobsen Observatory, First Friday’s at the Planetarium, and spring colloquium. If you are one of our wonderful alumni or another astronomy aficionado, we would love to hear from you or see you at one of our department events. 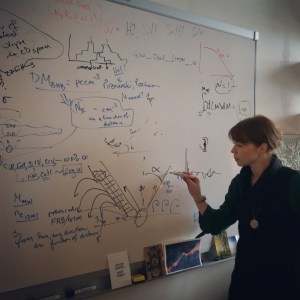 Jessica Werk has been an Assistant Professor in our department since 2016. She has been working on how galaxies acquire, eject, and recycle their gas, processes that make up the so-called “cosmic baryon cycle”. She has two large observational programs tuned to these problems. One, which she is working on with grad student Hannah Bish, is an observational survey with the goal of directly tracing the gas distribution and kinematics within the inner 15 kpc of the Milky Way disk.

The other is a huge extragalactic Cirgumgalactic Medium (CGM)-focused survey, called CGM2, that combines galaxy and quasar data from the Hubble Space Telescope, Keck Telescopes, Gemini Telescopes, and the Large Binocular Telescopes. Graduate student Matt Wilde has recently joined this project. To help interpret these observations, she and UW grad student Nicole Sanchez are working to directly compare their results with cosmological, hydrodynamical simulations that resolve baryonic structure on the same scales as the observational surveys.

In addition to her research Professor Werk is building a “SQuAD”; that is, a group of “Student Quasar Absorption Diagnosticians.” Her amazing group of undergraduates is working on a critical aspect of her CGM2 survey. They are heroically identifying every absorption feature in nearly 100 quasar spectra taken with the Hubble Space Telescope Cosmic Origins Spectrograph. That amounts to tens of thousands of absorption lines, ranging from neutral Hydrogen to highly ionized metal species like OVI, NeVIII, and MgX! Together, they will build the largest database of absorption line identifications to-date, which will be used by scientists all over the world to answer questions about the cosmic baryon cycle.

Outside of the university Professor Werk recently was a co-pilot on a float plane to British Columbia! She participated in a colloquium tour through British Columbia and Victoria. “I jockeyed for the co-pilot seat on a tip from Professor Julianne Dalcanton, and had the best flight experience of my entire life (and I am a weirdo in that I actually like to fly!). As a result of the experience, I briefly contemplated trying to get my pilot’s license, but then realized that would be too time-consuming and expensive and would detract from the time I have to spend with my galaxies.” Whether Professor Werk’s feet are on the ground or in the sky we are very excited about her research and the places it will take the department. 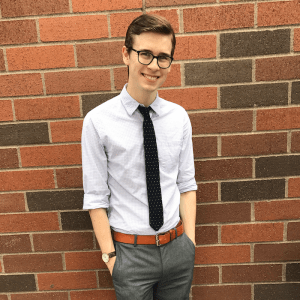 Nicholas Saunders is a senior graduating this June with a BS in Astronomy and Physics and a BA in Comparative Literature. Nick is a well-respected leader amongst our students and serves as one of our undergraduate representatives to the faculty board. He also conducts research on the detection of extrasolar planets with Research Associate Rodrigo Luger and Professor Rory Barnes. He recently presented his research at the American Astronomical Society meeting in Washington, DC.
Despite having a full schedule he still makes time to participate and lead outreach activities for the department. He is an officer in the University’s League of Astronomers club, and he helps organize and present at the monthly public planetarium shows. Both of these activities help the department reach diverse groups of students, alumni, and the general public. Outside of the department Nick likes to hike, camp, and play the guitar and violin.

“I read lots of books whenever I can spare the time. It’s remained an important passion of mine despite committing to such a heavy STEM degree – my love of books and movies is why I’m also getting the comparative lit BA.”

We are tremendously pleased to share Nick’s accomplishments with everyone. Nick is one of the many scholars in our department that help push the boundaries of exploration and knowledge. 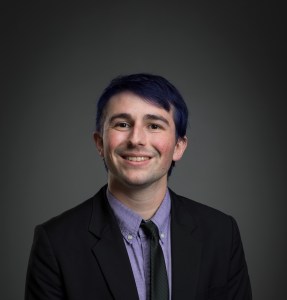 Trevor Dorn-Wallenstein is a 3rd year graduate student studying massive stars with Professor Emily Levesque. In particular, he is interested in utilizing cutting-edge stellar evolution models and simple observational tests to determine the importance of binarity in the evolution of massive stars. Professor Levesque says, “ Last quarter Trevor published his first first-author paper on the serendipitous discovery of a low-luminosity AGN behind M31 that is a very strong candidate for hosting the first confirmed binary supermassive black hole system. The paper received some great press coverage, and he wrote a guest blog about the discovery that was posted on the Chandra X-ray Observatory website.”

Trevor recently presented this work at the American Astronomical Society (AAS) meeting in Washington, DC. Trevor has been doing all of this while also kicking off some preparatory work on his thesis research (studying the effects of binary and rotation on massive star populations), helping to organize Astronomy on Tap, and playing his first concert as the drummer in the band Night Lunch (along with fellow Astronomy department graduates Spencer Wallace, Brett Morris, and Nicole Sanchez). When he’s not researching science and being in an awesome band he likes to bake cookies, and bake more cookies.

Here are few events that we hope you will be able to participate in.

April 21st is International Astronomy Day! This event was started in 1973 by Doug Berger, the president of the Astronomical Association of Northern California. He created this day so that all people could observe the skies. Astronomy Day occurs around the first quarter moon. This is one of the best times to view the Moon.

“The terminator can also be defined as that variable line between the illuminated portion and the part of the Moon in shadow. Along with the fact that a half Moon offers more viewing comfort to the eye as opposed to a full Moon, using a telescope with just small optical power (magnifications of 20 to 40x), or even with good binoculars, we can then see a wealth of detail on its surface.  Around those times when the Moon is half-lit or gibbous phase, those features lying close to the terminator stand out in sharp, clear relief.” Rao, J. (2006). The Best Time for Moon Viewing.

In honor of International Astronomy Day the department will be hosting planetarium shows on Friday April 20th. Please go to the Facebook University of Washington Planetarium page for availability. A link for tickets will be posted on April 8th. Seating is limited.

The Lyrid Meteor Shower will occur April 16th to April 25th, and will peak on April 22nd . The best times to view the shooting stars are after nightfall and before dawn. On average the Lyrid shower produces 15 to 20 meteors per hour, but can sometimes produce large bursts. Luckily, the light from the moon should not greatly affect the shower because of its quarter moon phase.

The League of Astronomers is a club at the University of Washington which seeks to expose as many people as possible to the joy of astronomy. With spring quarter fast approaching, and the weather clearing up significantly, there will be many more opportunities to get involved with the LoA and the astronomy department. Here are a few opportunities in which the LoA is involved: 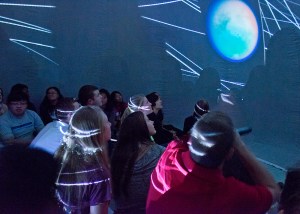 This quarter and next quarter, we will be taking our favorite inflatable dome out to several schools around the Seattle area. The mobile planetarium is an excellent opportunity to introduce yourself to presenting topics in astronomy, as most shows are 10 minutes long and are given to a wide variety of audiences. If you’re interested in attending a show you may contact uw.mobile.planetarium@gmail.com.

This Spring, the Theodor Jacobsen Observatory will reopen for public observing nights once again! At observing nights, student volunteers assist in setting up telescopes, conduct solar system tours, and answer astronomy questions. Interested students also have the opportunity to present at the observatory through the Astronomy 270 public outreach class.

That’s all from the League of Astronomers! Join them for more volunteering opportunities and astronomy-related fun! Our meetings are currently on Wednesdays at 4:30pm in the AstroLab in the Physics/Astronomy Building room B360.